Have you felt it? There has been an awakening.

Change is coming for SAP BusinessObjects users in the shape of SAP BI 4.3 – due to be generally available in the next few months (ie, early to mid 2020). This is the first major 4.x release since 4.2 in early 2016. Four years is a long time in software development, let alone politics, so there will be some big opportunities to grasp and a few challenges to meet.

What Are The Big Changes?

Here’s what I think are the biggest changes to come with 4.3 (in no particular order):

Some of these changes will affect customers more than others, and those that are heavily invested in deprecated tools such as Dashboards and Explorer will need to think hard about their next steps. DSCallards can help you with planning your new path so please get in touch with your questions and concerns.

Most end-users access BusinessObjects through the web-portal known as the Launchpad (or InfoView as it was called in XIR2 and 3). This portal allows people to login, view their reports and documents, interact with them, schedule them, perhaps create new Web Intelligence reports or edit existing ones. This won’t change – this is still its purpose – but the web-pages will look very different and some work-flows will change.

SAP calls its web-design environment ‘Fiori’ and it has slowly rolled out Fiori-style front-ends across its product range. A Fiori-style Launchpad is already available as an option in BI 4.2 (from SP4 onwards) so you can take a look if you have that version or higher installed. Change your normal URL from http:// 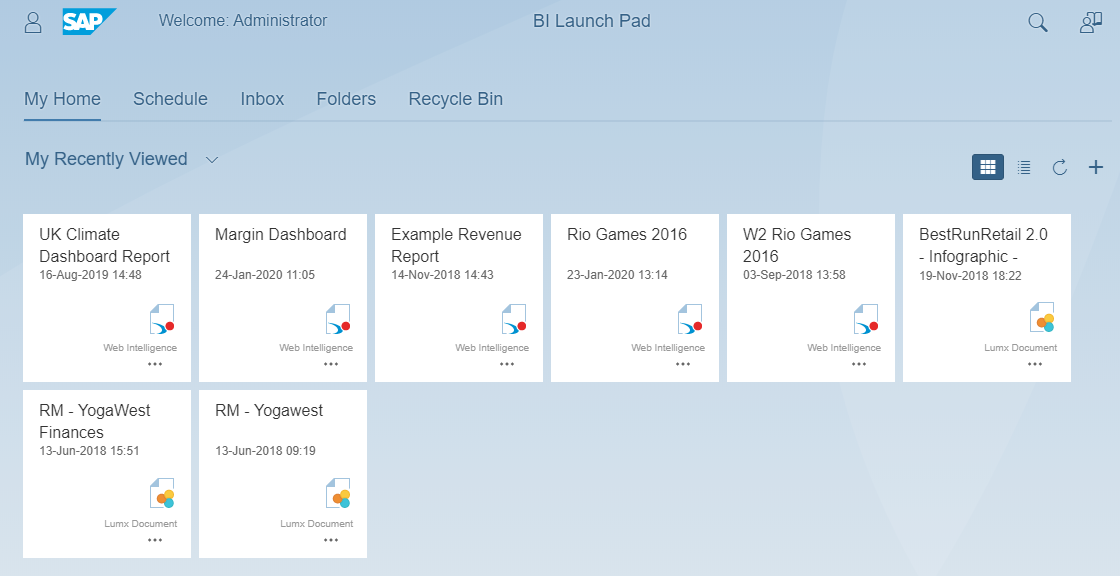 This new-look means that users of other SAP products such as SAC or their CRM/ERP products will feel more at home in BOBJ – but for those of you with only BOBJ it is a big change. In BI 4.3, as the only user interface available, it will bring new functions along with the need to learn its foibles and work-flows.

Removal of Explorer and Dashboards

We have known that this was coming for a while – these tools are Adobe Flash based and therefore will not be supported by most technology companies by the end of 2020. Even if you do not upgrade to BI 4.3 it will be harder and harder for your IT departments to keep these tools running.

An upgrade to BI 4.3 removes all support for these tools from BOBJ, and an in-situ upgrade will likely remove the actual installed software too! We have published blogs previously on what your options are to replace the functionality in these tools – now is the time to think seriously about your options if you haven’t already.

SAP Lumira and SAP Analytics Cloud are the two main routes to dashboards, reporting application functionality and data exploration in the SAP analytics product stack now. Talk to us to find out which of these, or other products, is best for you.

Re-design of the Web Intelligence interface

The advent of 4.0 back in 2011 brought in the ribbon-like menus in Web Intelligence, the last big redesign of the tool. For users transitioning from XIR2 or XI3.1 to BI4.x the task has been one of finding the buttons that you know are there, but are just hidden in the tabbed-structure of those ribbon menus.

4.3 changes the interface again, but not just in menu styles. The query panel, universe object icons, locations of navigation and available object panels, filter bars, input controls – these are all changing.

SAP has promised functional parity for Web Intelligence reporting between late stage 4.2 and the release of 4.3 so the buttons will be there somewhere, but it will be a challenge to find them among unfamiliar surroundings.

There are definite benefits to making the effort though. Web Intelligence in the Fiori Launchpad of 4.2 already has a few useful new functions and 4.3 carries these forward and adds to them.

If you have looked at the Fiori Launchpad in 4.2 already you may have noticed some nifty things you can do with WebI reports that you could not before. There is the ability to ‘auto-refresh’ the reports live onscreen – thus turning Web Intelligence into a dashboard tool that you can display on a remote screen and show updated data at regular intervals. Alongside this there is an option to animate the charts so that at each auto-refresh point the bars or columns on a graph will grow, or a pie chart spin, into life.

In 4.3 as well as bringing these new functions and other minor improvements, there is a whole new concept for interactive analysis – the administrators of the system can more easily control who can do what to a report. This will balance the needs of power-users and report designers, data-explorers and data-consumers.

In any new software releases there are always teething-problems and we would expect there to be some with the earliest version of BI 4.3. We will be heavily testing the new software to check for compatibility with existing reports and have been part of both the early- and standard-beta testing.

Along with new functions and behaviours of Web Intelligence there is another new concept being added in BI 4.3 – WebI as a data-modelling tool.

Currently the end users who build the pretty, informative, bits of a report also need to know how to build the technical data bits of a report, including perhaps complex merging of multiple queries and the creation of tricky variables and calculations.

In 4.3 those two tasks can be more easily separated. Technical power-users can create datasets in Web Intelligence from multiple universes, multiple queries, include spreadsheets or CSV based information, write freehand SQL, merge the data, write variables and calculations and then publish all of that as one neat package. This can then be consumed by other users as the data source for their reporting.

I think the impact of this could be huge. It democratises data-modelling steps that previously may only have been available to DBAs or IT users. It means business analysts can manipulate data in an easy to use tool and then provide the results of their efforts for others to consume.

It won’t replace complex ETL processes or tools, or remove the need for universes, but it will enable more agile development, and could improve the speed of development of visualisations and dashboards in other tools.

SAP Analytics Cloud is SAP’s main focus in the analytics space and has been for the last few years. It is where the majority of their development and investment has gone, and they want more and more people to use it and benefit from its powerful abilities.

There has been integration between SAC and BOBJ available from day one, with data being importable via universes, and live data being viewable via them too.

In BI 4.3 that interoperability between SAC and BOBJ is taken a few steps further. Businesses with licences for both tools will be able to integrate users more easily, and there will be links to your SAC tenancy from the BOBJ Launchpad.

SAC will be able to consume data via the new WebI data models, which could open up huge opportunities for easier dashboard design (in the same way consuming BOBJ web-services did with Xcelsius\Dashboards).

The front-ends of both systems are more homogenised, with Fiori design aesthetics so users will be happier switching between them, and the redesign of WebI is in part intended to mirror work-flows from SAC story design.

How to Prepare for These Changes

This change is inevitable and unavoidable in the long-run so how can you be best prepared for it? Talk to us at DSCallards before you start planning and we can ensure you have the best advice and most knowledge.

Before you take the plunge and update your production system to BI 4.3 there are many things you could do to soften the impact and skill up users on the new opportunities it will bring:

Established in 2001, we are focused on helping you to get more value from your SAP BusinessObjects Business Intelligence investment. We encourage our team to write regular blogs so keep an eye on this page.